Winter is a time when our body craves for richer and spicier food. The excesses of the festive period gives way to the intention of clean eating and everyone jumping on to the healthy bandwagon in January. Healthy eating does not have to be difficult to prepare and plan. It is also possible to add in flavours from the use of light spicing and aromatic herbs that gives you a more satisfying feel and impression of having a fuller meal. I have been looking at simplifying some of the dinner recipes at home recently and have also incorporated more vegetarian dishes as well as Fish, Turkey and Chicken in our diet. I had posted a recipe for a tasty Turkey and Chorizo Burger not so long ago. I have been revisiting some of the childhood dishes that I enjoyed while growing up in India like Chicken Stew and Khichuri ( Indian risotto with rice and mung beans). I plan to include some of this recipes soon. However I did experiment with the Chicken Stew recently and came up with this Chicken in a Miso Broth with Vegetables and Rice Noodles. Miso is a traditional Japanese fermented paste made from soya and rice or wheat or rye. It imparts a rich and deep savoury note to a dish whether you are making just a plain and simple miso soup or you could use the paste as a marinate. You can buy the Miso in a paste form many oriental supermarkets. For my recipe for more simplicity I have used the The Classic Siro Miso Soup packets which are easily found in our British supermarkets.

Method
Heat a medium pan and add a teaspoon of oil. Add the Celery and the onion and fry for a couple of minutes. Add the Garlic and fry for another few minutes. Add the chicken and fry gently. Add about 500 ml of hot water and bring to a gentle simmer. Skim off any excess fat or the foamy mess if they gather on top. Add the vegetables and simmer for another 10 minutes before adding the paste from the Miso soup. Simmer for another 10 to 15 minutes till the chicken is almost done. Now take the chicken off the liquid and leave on a clean chopping board. Add the rice noodles into the broth adding more hot water if required. Stir gently and bring to a boil. Boil for a bout 5 minutes or according to the Rice Noodles packet instruction. De bone the chicken and a tear into small pieces. Add them back to the broth and add the Garnish part of the miso soup. Adjust seasoning. Garnish with sliced chillies and spring onions and serve hot.

I have been absent from this blog for a long time. There have been some major changes for me. I have a new job now working Monday to Friday and we have moved into a new house. Working routine hours over set days might have its advantages but after having worked varying shifts for the past 17 years I am still adjusting my life around my new routine. My cooking priorities have changed slightly and I am learning to make the most of my time available. By the time I have some dinner prepared I don’t have much natural light left to take nice pictures too. So blogging took a bit of a back seat but I am determined to get back to it. I was thinking about what recipe to post for a few weeks. The answer came to me as I was looking though some old pictures on my mobile phone. 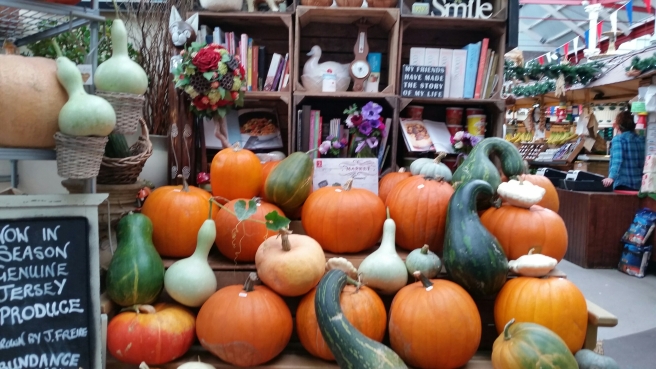 Couple of years ago around this time, I was in America touring the east coast from Virginia to Boston. Everywhere we visited there seemed to be an abundance of Pumpkins as they were gearing for Halloween. As I was talking to my friends and relatives there, I was surprised to hear that even though they were all familiar with Pumpkin Pie and Pumpkin Spiced Latte (a popular seasonal export by Starbucks), they were shocked to hear that Pumpkin could create a great soup. I remember that in those 15 days I had to make (at least on two occasions) pumpkin soup. Now in a land of plenty such a hearty soup should be a part and parcel of Autumn life. It’s surprisingly versatile and can absorb a lot of flavour. I have a few versions (ie with Chorizo, with Goats Cheese, with Lentil, with crab meat and so on) but for this recipe I will like to write about Spiced Pumpkin Soup with Coconut. The pumpkin could be easily replaced by Butternut Squash as I often do but at this time of the year stick with pumpkin.

Method :
Heat oil in a saucepan. Add the star anise. Add the chopped garlic and chilli. After about 30 seconds add the chopped onion. Fry till translucent and add the pumpkin pieces, cumin and coriander powder. Stir for a minute or two before adding the coconut milk and some water to an inch over the pumpkins. Bring to a boil and simmer gently for about 20 minutes. Check that the pumpkins are completely soft. Blend the soup using a hand blender. Check for seasoning and add a bit of water if necessary for the desired consistency. Simmer gently for a few minutes. Add a squeeze of lime and the chopped coriander. Serve hot. 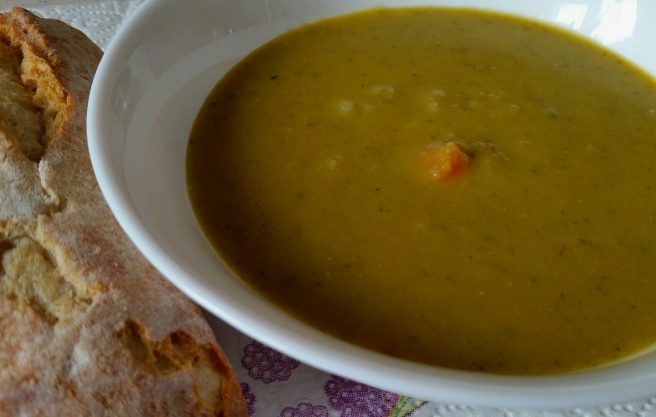 After a few weeks of eating to our hearts content during our trip to India, it was time for some simplicity and some home comforts. The morning after we arrived back a supermarket shopping trip was the first thing on the list. Out sleeping pattern seemed to cope with the timing better than out tummy. (India being five and a half hours ahead). We fell asleep early around 9 pm and woke up around 6.15 am feeling fairly refreshed but very hungry. Soon after the school run A bowl of Porridge followed by a yoghurt and then a few pieces of chocolate were consumed before we headed to the supermarket. During shopping we felt another hunger attack. At that point we decided to get back home and make a quick soup. My wife spotted a 450 gms mixed diced casserole veg pack with kale and pearl barley. So we came home and she started to prepare a quick tasty soup. I added the Thai Green twist but kept it simple. I have tried to break it down as best as possible to get a recipe. You can use any vegetable mixture as per your choice either from fresh or a pre packed one. Our 450 gms pack (including the Pearl Barley) produced 3 generous portions. You could choose to use coconut milk or replace it with skimmed milk to make it a bit healthy. I used about 1tbsp of creamed coconut and about 150 ml milk. 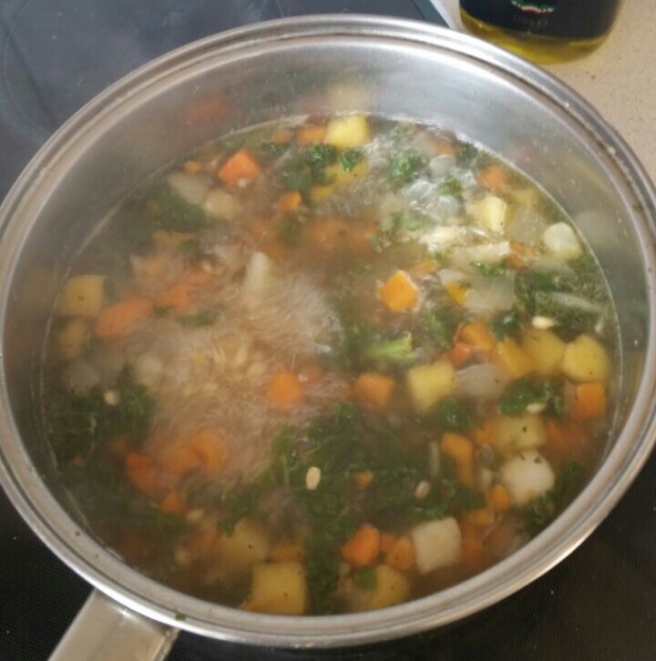 Method
Heat a wide bottomed pan. Add Boiling water to it and add all the vegetables. Add a heaped tablespoon of the green curry paste. Bring to a boil and simmer for about 15 minutes. Make sure that the vegetables are tenter. If not then boil for a bit longer. Add the coconut milk (or cream or normal milk) and simmer for a further 10 minutes. How blend (not too smooth) using hand blender. Season with Salt and Pepper. Add a tiny squeeze of lemon juice (optional) and serve with crusty bread or on its own. It was a quick and tasty soup that was ready in no time.

Tomorrow we leave for a two and a half week holiday to India. We spent the day yesterday and today trying to finish up all the fruits, vegetables and other perishables at home. This morning I discovered a few fresh tomatoes and immediately thought of making a simple soup. Winter is a time when we all enjoy a hot bowl of soup. In our home the hand blender is one of the most used kitchen gadget. We often make a soup with whatever vegetables we have at home and also we make a lentil soup using red lentils (recipe to follow later). These all are fairly easy and quick to make. Tomato soup is nutritious and a great way to get some veg into your little ones too. I usually add carrots and celery to mine. If you have any fresh fennel lying around then add a bit of that too. Try and use the best quality tomato you can get hold of as that’s the key ingredient here. I have used canned chopped tomato in the past and they give good results too. Just use a whole 440 gm or thereabout can of good quality chopped tomato. I often add a bit of cream or a spoon of cream cheese or crème fraîche at the end. You can also use fresh or powdered stock for a deeper flavour but if its good quality tomato then I prefer to let the tomato do the talking.

Method
Heat a heavy bottom saucepan over medium heat. Add olive oil. Add the garlic and after a quick stir add the onion. Fry for a few minutes and add the carrots and celery. Fry covered on a low heat stirring often for about 10 minutes. Add the tomato and salt and put the heat up to medium and stir till the juices from the tomato starts to come out and the mixture starts to turn into a pulp (around 10 mins). Now add about 300 ml hot water and bring to a boil. Add the Bayleaf and thyme. Lower the heat and simmer for abound 15 minutes. Take off the heat and blend using a hand blender. Add cream or cream cheese if using. Dilute if necessary. Bring to a gentle simmer. Season the soup and serve immediately with some crusty bread. ENJOY!! 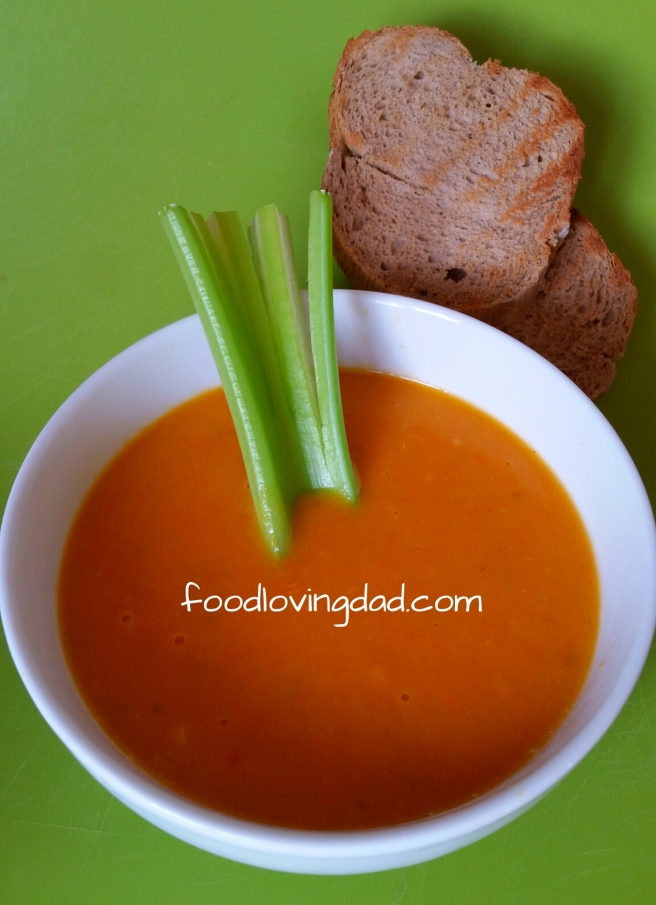